Office of the Jurisdictional Prelate

You are here:
News 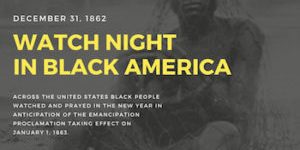 I would like to thank each of you who have are going to share your thoughts with the Saints this evening. We pray that the seeds you plant will blossom and bring forth much fruit.

Mother was talking to me the other day about the significance of Watch Night to our community. We did a little research to expand our knowledge of Watch Night which I, growing up in New York had not even been aware of until I moved to the West Coast and began to meet folk who had grown up in the South and more specifically in the Southwest. I would like to share with you some of the history behind this special evening of celebration.

We are going to take a look at the historical significance of this gathering of African American Christians which the churches have made a particular celebration of significance for our community.

We flashback 157 years ago to what historians dub “The Battle of Antietam” which took place near the village of Sharpsburg MD., on the shores and bridges over Antietam Creek, the first battle of the Civil War fought on Union soil.  Up until that point in the war, the Slave holding secessionists had gained the upper hand in every conflict beginning with Bull Run or as it is sometimes called, 1st Manassas. Fueled by confidence in his early successes, Confederate General Robert E. Lee took his 40,000 man Army of Northern Virginia including the Texas Brigade into the Federal States by invading Maryland where he was confronted by the 87,000 man Army of the Potomac, commanded by General George McClellan. On September 17, 1862 the two forces clashed. That contest produced what remains as the bloodiest day in United States history with a combined tally of 22,717 dead, wounded or missing in action. The Confederate Army was repulsed in what was the most significant military success of the Union Army up until that date in the unfolding drama of the Civil War.  Unfortunately, General McClellan, who history has depicted as an overly cautious and conservative military man, did not recognize the extent of his victory and allowed the Army of Northern Virginia to escape annihilation by not pursuing that retreating force, allowing Lee and his men to safely cross the Potomac River and return to the friendly confines of Virginia extending the War for an additional three years.

But, we who are of descendants of the enslaved peoples forcibly extracted from our African motherland, McClellan’s reticence became our cause for celebration. Sometimes God uses our mistakes, our failings, our weaknesses to produce a far greater good then we might imagine.

While McClellan did not seize on his victory to immediately crush the Grey Army, President Abraham Lincoln used the victory to clarify the nature of the war from a euphemistic political argument over States Rights and the integrity of the Federal Union, to a moral argument for the Abolition of slavery in America. Five days after the victory at Antietam, Lincoln authored the Emancipation Proclamation declaring that all of those held in bondage in the Confederacy would become Free Men and Free Women at the dawning of the day of January 01. 1863. Lincoln was not totally altruistic as is evident in a caveat to the Proclamation that it would not become law if the rebelling states surrendered and returned to the Union fold.

Lincoln was not an abolitionist. He was more of a pragmatist.

He was aware that both France and England, global powers of the time, were considering recognizing the Confederate States of America as a legitimate government entitled to trade privileges and other benefits of nationhood as long as this Civil War was being fought solely over States Rights. But both France and England had both emancipated the enslaved and forbade slavery in their home countries and colonies. By making slavery illegal in America, Lincoln had curtailed any movement by those foreign powers to intervene on the side of the South.

And so African Americans watched the calendar. They kept their eyes on the hands of the clock as it tick tocked its passage to freedom.  I imagine that some of the educated Blacks prayed that the South would not surrender. And on that first Watch Night on January 1, 1863 they were not disappointed as Johnny Reb did not surrender and the Emancipation Proclamation became law, determining the destiny of our people to be set free once the South was totally defeated.

From a military standpoint most students of the Civil Was would cite the July 4th 1863 weekend  Battles of Gettysburg in Pennsylvania repelling the Confederate invasion of the North and the Battle of Vicksburg splitting the Confederacy in half at the Mississippi River as the most important turning points of that monumental War for the Soul of America.

But for God’s people of color the real victory occurred with the creation of the Emancipation Proclamation five days after the Army of the Potomac crushed Lee at the Antietam Creek Bridge.

Christmas Greetings from our Leaders
December 21, 2022