Office of the Jurisdictional Prelate 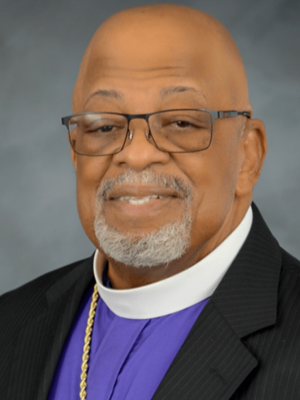 Bishop Charles G. Nauden was born July 5, 1946 in Wynne, Arkansas.  He was the seventh of nine children born to Hattie Nauden. At the age of 16, he left his Arkansas home and moved to Los Angeles, California. Shortly after his arrival in Los Angeles, he united with Good News Church of God in Christ, under the leadership of Pastor Allen Rucker.  In 1965, he gave his life to Christ and filled with the Holy Ghost.

In 1966, Bishop Nauden was drafted into the United States Army and shortly thereafter, was deployed to Vietnam where he was injured.  In 1968, as a wounded warrior, he was honorably discharged.

Following his military service and upon returning home, he received and acknowledged his call to preach the Gospel in 1969.  In 1971, Bishop Nauden joined Good Shepherd Church of God in Christ, under the leadership of Pastor Murphy L. Hawkins. He was ordained as an Elder in the Church of God in Christ in 1975 by Bishop S.M. Crouch.  He subsequently received a National Evangelist License from Bishop L.C. Page.

In pursuit of a higher calling, he studied at Life Bible College in Glendale, California; in 1987 he graduated from Heritage International School of Ministry in Norwalk, California; in 2001 he received an Honorary Doctorate of Divinity from the American Urban University and another from the Annie B. Campbell School of Ministry in 2006.  But the pinnacle of his formal education was reached in April of 2004 when he received his earned Doctorate of Theology from North Carolina College of Theology.

Bishop Nauden has been serving as pastor of Holy Way for 41 years, but his resume is extended to serving Southern California Second Ecclesiastical Jurisdiction from its inception in 1985, serving under the leadership of the late General Board Member, Bishop George D. McKinney.   In 1990 he was appointed District Superintendent for the United in Love District; and in 1993, he received the appointment to Regional Leader of the Los Angeles Area.  In 2009 Bishop Nauden was appointed First Administrative Assistant of the Second Jurisdiction.  He also served as the Chairman for Bishop McKinney’s Election Committee for four consecutive General Board Elections.

In November of 2011, pursuant to a recommendation from Bishop McKinney, Bishop Nauden was formally consecrated as an Auxiliary Bishop in the Church of God in Christ by Presiding Bishop Charles E. Blake in the Holy Convocation.

Bishop George D. McKinney made his heavenly transition on April 20, 2021.  On December 3, 2021, Bishop Nauden was ratified, by the General Board, as the Jurisdictional Bishop for the Southern California Second Ecclesiastical Jurisdiction.

Bishop Nauden is certainly dedicated to his family.  In 1979 he married the love of his life, Mother Cecilia A. Nauden.  They are the proud parents of four children and eight grandchildren.